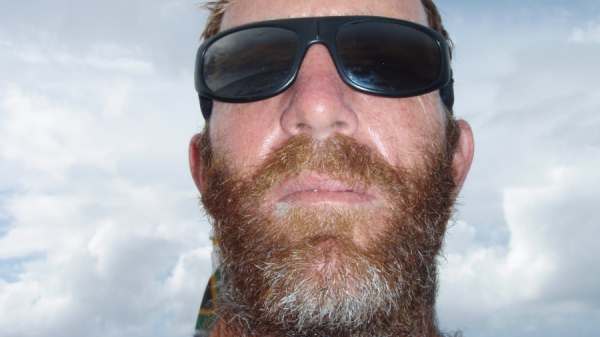 [On boat] Peter: “If you look around you right now, we’re in the doldrums. Three days we’ve been sitting like this – this is the first time we’ve had no wind against us. We’ve had hectic side winds, hectic head wind. Our bodies are broken at the moment. Our hands are shreds, our bottoms are shreds. It’s just very testing, I must admit.” 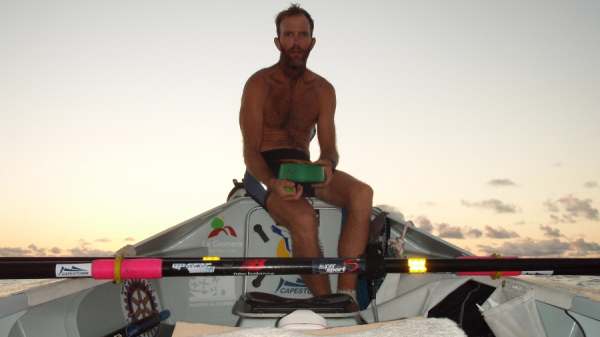 They rowed over 5000km in a boat measuring a little more than seven metres, competing against 22 other crews from all over the world. They were entirely self-sufficient, carrying all their own supplies. It took three years of intense preparation. One of their biggest challenges was raising the R1.4-million needed for the trip, because potential sponsors couldn’t quite understand why anyone would row across an ocean.

Bonita: “What advice did Tim Noakes give you?”

Peter: “He said what we should do is first plan it so that the last 10 days of the race is actually when we put our heads down and race. The first part of the race we must use as training, because if we arrive at the start of the race peaking, physically, we’ll last 10 days.”

It almost didn’t happen. Their boat, Gquma Challenger, was held up by Canary Islands customs officials and was released only four days before the start of the race. They still had an enormous amount to do, including emergency repairs to their desalinator. But on the 2nd of December 2007, they began their epic journey.

Peter: “We had our first storm four hours into the race. Unpredicted! They never said, Okay cheers guys, you’re going into a storm!'” 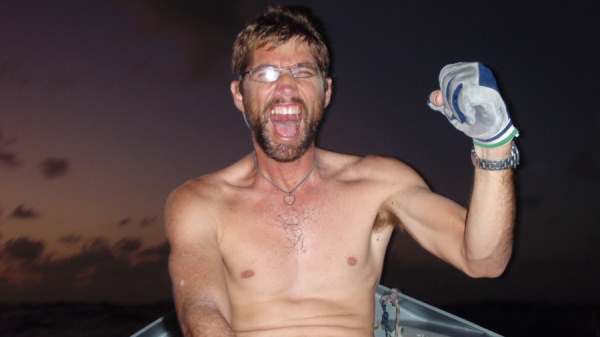 [On boat] Peter: “We were not expecting this kind of sea. The sea has been all over the place. We’ve had swells coming in from all directions. Shame poor Bill has been very, very sea sick. I can’t actually believe what we have let ourselves in for.”

Peter: “And once we had got through that storm, we were very comfortable with each others’ abilities to handle the sea.”

[On boat] Bill: “Good! Better than I’ve felt for the last couple of days, that’s for sure!”

Bonita: “What were some of the physical challenges you faced?”

Bill: “Well, the sleep deprivation is radical. When you’re rowing for 90 minutes, and then having a 90 minute break, that 90 minute break is broken down into cooking food, eating food, resting, getting up, preparing for your next session, and getting behind the oars.”

[On phone] Peter: “Ok all the guys from behind are catching up and beating us”

[On Phone] Woman: “No Peter they’re not catching up! You’re 55 miles ahead! You’re cooking, and you’re going to get wind I promise! Okay?”

[On phone] Peter: “I’ve got wind from this afternoon’s lunch.”

Peter: “Our biggest challenge was physically. We had prepared for it right from the beginning: we knew what was coming. It was our bottoms.”

[On boat] Peter: “The one thing that has been getting to me is that no matter what you do, you can never be still in this boat.”

Peter: “You don’t get friction between the seat and your bottom, because it’s a sliding seat. But what happens is that’s the bone you sit on: because the boat’s moving to and fro, your bone actually pushes through your muscle, and in fact whatever you’ve got there, until it’s just bone and skin. And it’s incredibly painful, and it creates pressure sores. And on each cheek you’ve got these four or five pressure sores. They’re like boils: it’s exceptionally painful.”

[On boat] Bill: “It’s a beautiful evening hey? Lovely, got nice tail conditions, the swell’s not too big”

[On boat] Peter: “What are the tail conditions by the way? A nice rash on your bum?”

Peter: “And the next thing then was obviously was going to be our hands.”

[On boat] Bill: “My hands are cool, I’m slowly starting to get a bit of claw grip. Nothing like Pete’s though – Pete’s are very nasty.”

[On boat] Peter: “You get used to it you know. You don’t actually feel it after a while – except the claw grip’ – the tendonitis. Basically what happens is, you’re gripping the oar like that for so long – for twelve hours a day – that when you come off you can’t straighten your finger, or actually close them anymore.”

Peter: “At the end of every shift I would go into the cabin, and I’d wrap my hands up ” like this – so that I could sleep with my hands closed. And then when I woke up, I’d just get up, unwrap it, get onto the oars, have like two or three minutes of pain, and then that would be it.”

Bonita: “You and Peter must have done quite a few things to save time: what are some of those things?”

Bill: “When you need to go to the bathroom, the other one doesn’t stop rowing. The bathroom is in the shape of a bucket. If you needed a pee, you peed in a bottle and emptied it overboard because if you stood on the edge of the boat, the boat would list, the other guy wouldn’t be able to row, and you’d waste a minute. You do that four or five times a day each, and that’s 20 minutes of rowing you’ve lost. And that’s another mile.”

Of the other boats, the British crew on No Fear’ was their biggest challenger, keeping the pressure on throughout the race.

[On boat] Peter: “No Fear are in a good position obviously with good weather, and they’re stalking through, coming from behind. They were well behind, but now they’re flying through. Watch this space: this is where the race begins.”

Bonita: “How did you stay motivated?”

Peter: “We’d have a 10 minute wake up call, and we’d go like this: Hey Bill! Bill!’ And it would usually take some time for Bill to answer, and then you’d get a Ja’ and then I’d say – and this was set, so it would happen every singe time – You won’t believe it bru, but we are 90 minutes closer to Antigua!’ And he’d have to reply, Yeehah!'”

Bonita: “What was your darkest moment?”

Bill: “In one of the storms, somewhere in the middle, I had a particularly bad moment, a couple of minutes before the end of my session, where three waves came. The first one broke on top the cabin and sprayed all over the place, the second one I just barely made it over, and the third one broke on top of me. And we’re talking 15, 20 foot waves, a two story house coming down on top of you. It was the only time I really got quite frightened. Not for myself, but that I wasn’t going to see my family again. And I climbed into the cabin and I phoned Kate and I said, Look, just in case, I’m just phoning to say goodbye.'” 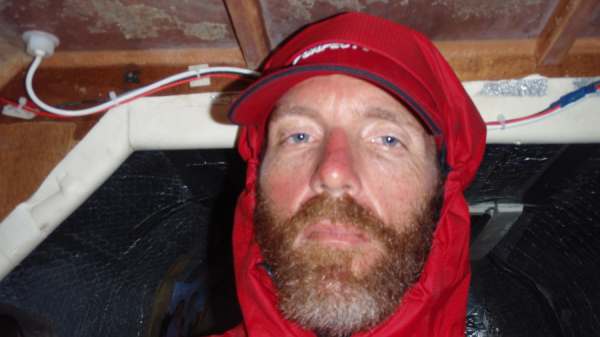 Kate Godfrey (Bill’s wife): “When he rang me, I actually really believed he was going to be fine. What I was most stressed about, was the fact that he believed that he wasn’t going to make it.”

Bill: “That was quite a revelation for me, because by admitting to my own mortality, I could take on anything from there on.”

Peter: “Those four storms that we went through were hectic. The last storm – which was the last four days of the race – it hit us at 196 nautical miles. It was survival for us, so all we did; I’d say to Bill, Ok Bill what we’re going to do now, is just survive. We’ve got to make sure we don’t catch these ones’. Because as soon as you start catching those waves, you’ll broach to the side and roll.”

Kim van Kets (Peter’s wife): “It’s almost unbelievable to me that you can just exist in such a state of such anxiety for such a long time. It was very real to me that he may not come back.”

[On boat] Peter: “The morning after the big storm”

[On boat] Bill: “We’re lucky to have survived it.”

[On boat] Peter: “We’re very lucky to have survived it.”

Man (No Fear crew member): “I reckon we’re probably stronger than the South Africans. I mean they are just hanging on for dear life.”

[On boat] Peter: “We’re still dicing it out with No Fear. Every time we get an update, either we’ve taken two miles on them, or they’ve taken two miles on us. It is ranging between 24 and 28 miles, and in a race like this, that’s nothing. One small mishap with the weather or something, and we’ve lost it.” 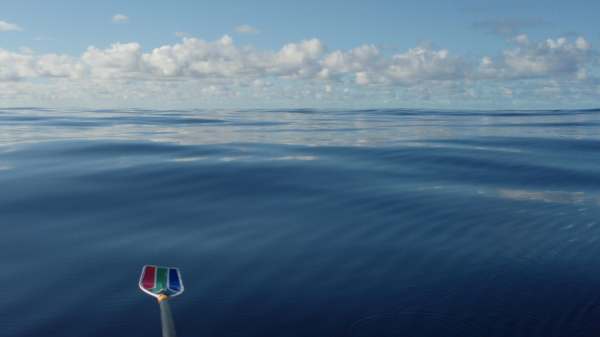 Bonita: “With only ten days to the finish, they hit a wall of absolute isolation when they lost their satellite communications.”

[On boat] Bill: “Yesterday our satellite communications packed up, so there’s no way of getting any weather information, or updates on who’s where, etcetera. What’s more, we can’t speak to our families, which is driving us absolutely insane.”

Bill: “I was ready for most things that were thrown at me, except the emotional side. I was physically prepared, I was mentally prepared, but I wasn’t emotionally prepared. Emotions: it was like a friend described very clearly: it was like PMS for 50 days, because you’re going from absolute ecstasy to complete down doldrums, feeling the worst you’ve ever felt.”

[On boat] Bill: “It has been almost two months since I saw my kids, my wife. And I really miss them.”

[On boat] Peter: “We’ve got 18 miles to go and the Atlantic Ocean is throwing everything at us. Bill and I are surviving’!”

Peter: “It was the last day and we could see the island. We didn’t know if we were still in first position. We hadn’t had contact for the last ten days, so we had no idea if we were still first. I saw a helicopter in the distance and I said Bill! There’s a helicopter, you won’t believe it hey!'”

Bill: “We saw the helicopter and we signalled up to the chopper: Are we still number one?’ Ja, you’re number one.’ We knew we were there then. From there, adrenaline just took over: we still had another 10 or 12 nautical miles to row.”

[On boat] Bill: “Last bit of daylight on our voyage, and there it is: there’s Shirley Point.”

Bill: “And slogged it in through cross winds and waves all over the place, bouncing us around. The buzz was incredible. As we were coming into the harbour, after crossing the finish line, there were a lot of South Africans off yachts, in English harbour and Thelmus Harbour that were gathered there hearing that South Africans were coming first. My oldest son actually started singing the national anthem and they all joined in. And hearing it echoing across the water. It cannot be described in words. ”

It was a close race right to the finish.

Man: “Welcome to the Caribbean!”

The South Africans beat their closest rivals, the British crew, by a mere six hours.