A lot has happened in the last 10 days! Since Musina we have been largely out of cell phone range and in fairly wild country. Soon after leaving Musina we began to hug the South bank of the Limpopo River where the landscape was is dominated by massive baobabs and Mopani trees. We spent an amazing night sleeping under the stars and the full moon right on the river bank in a camping site which was situated on a crocodile farm ‚Äì for some reason, eating braaied crocodile sosaties metres from a river teeming with crocs somehow a bizarre sense of one upmanship. After leaving the crocodile farm we followed the sandy, stony, rutted border road all along the river with Botswana a stone‚Äôs throw away meeting nobody other than a military vehicle all day.

Despite many signs of elephant activity we were both disappointed and relieved not to come across any elephants ‚Äì we did however see giraffe, kudu, bushpigs and loads of other game. We spent a magnificent rest day in a hunting lodge on the bank of the Limpopo River on a farm belonging to John Williams (the Springbok Flank from the late 70‚Äôs), before braving the dirt roads again heading toward Tom Burke and on to Stockpoort and Buffelsnekdrif. There is no accommodation of any sort in this area and we were fortunate to spend one night camping at the Cumberland Police Station where we experienced great hospitality and no Easter Weekend crowding!

From Cumberland we kept heading West through Silent Valley. Finding somewhere safe to camp is a daily concern and we were once again very fortunate to flag down a farmer as we were loading our bikes who offered us the use of his hunting lodge on the apt but colourfully named farm ‚ÄúTemurengon‚Äù. The next morning my very patched tyre tube gave up shortly after we started the morning‚Äôs ride and Peter set off to track down our support vehicle leaving me to push my bike until he returned with spares. Within minutes of his departure I heard that distinct lion noise (which always sounds so closed when it can easily be miles away) and spent a couple of anxious kilometres trying to sprint away from the sound (while pushing my bike) as quickly and quietly as possible.

I was greatly relieved to get a replacement and be on my way. We had a beautiful ride despite a brief torrential downpour along the Northern Border of Madikwe (where we were fortunate to see elephant) past the Derdepoort border post before turning South towards Zeerust for some fairly easy riding before Thursday‚Äôs rest day. I have now completed just short of 2000km of cycling and am finally beginning to feel as if I am becoming a cyclist ‚Äì it has been infinitely harder for me than the first 1000km of running!

I am expecting a couple of days of very tough riding on very sandy roads and will probably have no coms for quite a while. We will also be saying goodbye to Erlin Moll who has been with us for just over 2 weeks and who has been an immense help to have around (despite being a fairly reluctant mountain biker!)

[noteblock] We have about 12 days of cycling left and will be heading past Mafikeng tomorrow where we will stock up with supplies before heading off into the wilderness around Kgalagadi. [/noteblock]
Author: Kim 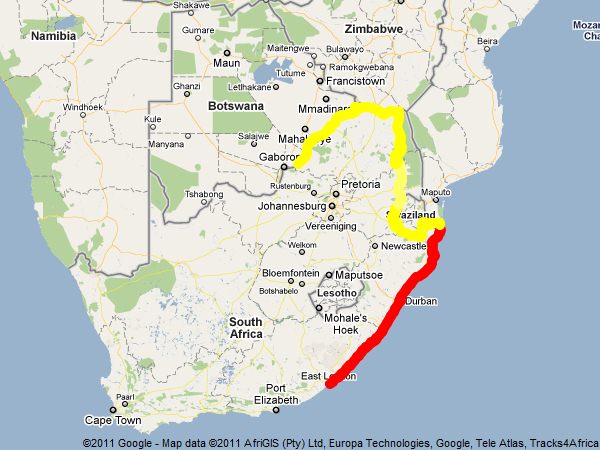