After years of saying that I really need to write a book and having sat down on numerous occasions to do just that, but never getting it done, I am really proud to announce that ŌĆ£IT IS DONE!! ”
With copious amounts of help from Kim who edited and helped with my ailing English, I have just completed writing my first book, ŌĆśThe Eighth SummitŌĆÖ.
The book is to be edited and published by Burnet Media (Two Dogs and Mercury) and distributed by Jacana.
It will be retailed for R260-R280. If you are interested you can pre-order through my website for R200 + R50 postage (within SA). 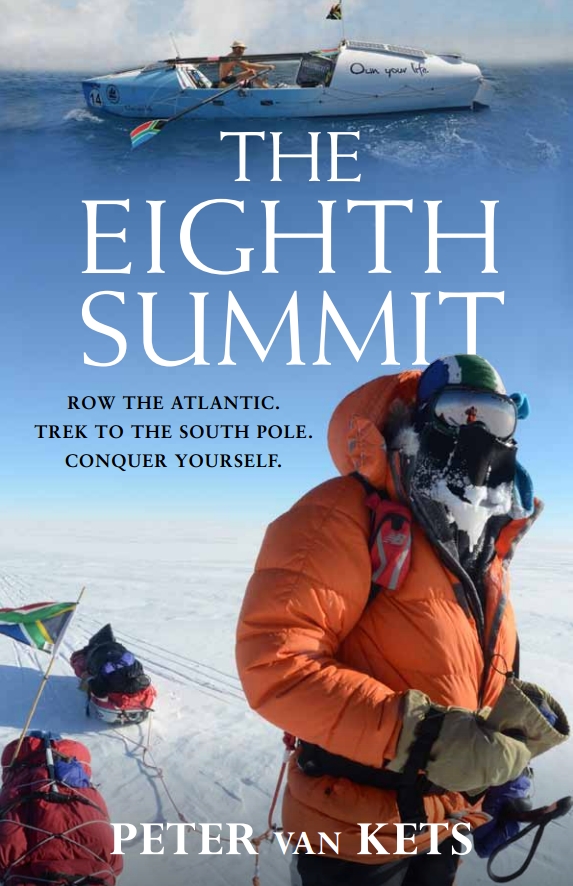 Click here to view the full introduction from the book

The Book
in short: A motivational memoir that recounts and takes inspiration from three epic expeditions undertaken by adventurer Peter van Kets: winning the Woodvale Atlantic Rowing Race in 2008, rowing the Atlantic single-handed in 2010, and trekking unsupported to the South Pole in 2012.extended blurb: The word ŌĆ£adventureŌĆØ is deeply entrenched in the soul of man. Nations have been built, wars have been won and discoveries have been made all in the name of adventure. The great challenge of the modern age is the Seven Summits: scaling the highest peak on all seven continents ŌĆō but The Eighth Summit is about inspiring the…

Human spirit
In his memoir, Peter van Kets takes readers on three of his greatest expeditions ŌĆō incredible, unsupported adventures across the Atlantic in rowing boats and across the icy high plateau of Antarctica on foot and sled ŌĆō with the goal of lifting their spirits and motivating them in whatever they do. As a passionate speaker and conservationist, Peter does all he can to inspire people and change their lives, and he has addressed thousands of people since being awarded SA OutThere Adventurer of the Year in 2011. Typical topics of discussion are vision, planning, team work, strategy, conflict management, working in a dynamic environment, self-discipline and perseverance. The Eighth Summit is his story.

The Author
Peter van Kets is one of the worldŌĆÖs top professional endurance adventurers, a conservationist and an international keynote/inspirational speaker. He has been involved in numerous expeditions around the
world.

“Hi Pete, I’ve just done reading ur book in one sitting…it is easily the most phenomenal book IŌĆÖve read. It had me experiencing the whole range of emotions and is massively inspiring and encouraging on so many levels. I take my hat off to you. Russell”